Many supporters of gay rights, including President Obama, believe that sexual orientation should be treated as a suspect classification – that is when a government policy makes classifications on the basis of sexual orientation, courts should view those policies with suspicion.  The problem for the Court, and especially Justice Anthony Kennedy, is how much suspicion.

Justice Kennedy has written two landmark opinions in favor of gay rights in past cases, but it is not entirely clear how the logic of those opinions fit into this system of civil rights law I just described. Buried in the oral argument transcript of the Proposition 8 case is a potentially key revelation of how Justice Kennedy is thinking now:

JUSTICE KENNEDY: Do you believe this can be treated as a gender-based classification?

JUSTICE KENNEDY: It’s a difficult question that I’ve been trying to wrestle with it.

What Justice Kennedy is saying here is: don’t think of it as gay marriage, it’s same-sex marriage. Discrimination on the basis of sexual orientation isn’t the problem; gender discrimination is.

If you think this is a ridiculous notion of constitutional law, you will be even more surprised to learn who first advocated for gender discrimination protections to be extended to men.   It was a young ACLU attorney named Ruth Bader Ginsburg. Yes, THAT Ruther Bader Ginsburg, and you better believe she was dancing underneath her robes when she heard Justice Kennedy muse about gender discrimination. 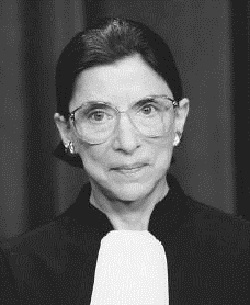 Most pundits believe Justice Kennedy wants to take a cautious approach that does not push the country too far in any direction. Slate’s Sonja West outlines some of the advantages of this legal framework:

A gender-discrimination ruling on marriage would not, for example, determine how much constitutional protection a person might receive if he was fired from his job because of his sexual orientation. Kennedy could save that case for another day. It also does not give fodder to the slippery-slope argument about polygamy, which presents a problem of numbers and not gender.

Another advantage, at least perhaps in Kennedy’s worldview, is that his opinion need not hinge on a constitutional right to privacy. Kennedy could side-step any icky feelings he might get from wading into privacy rights, which tend to include family-based freedoms like the right of procreation, childrearing, contraception, and abortion.

A gender discrimination approach also closely links the case for same-sex marriage to the case for interracial marriage. When Mildred Jeter married Richard Loving in 1958, a Virginia trial court judge sentenced them to a year in prison. The judge justified the state’s law banning interracial marriage in part by stating, “Almighty God created the races white, black, yellow, malay and red, and he placed them on separate continents…. The fact that he separated the races shows that he did not intend for the races to mix.”

In one of the best-named cases in history, Loving v. Virginia, the U.S. Supreme Court held: “Under our Constitution, the freedom to marry, or not marry, a person of another race resides with the individual, and cannot be infringed by the State.” One could easily imagine this Court switching a couple of words in that sentence.

The game “What Will Justice Kennedy Do?” is such fun for Washington insiders and academics alike because the answer is almost never clear.  However, I think there is a decent chance that gender discrimination may provide the solution for which he is searching.